Most experienced online poker players can recognize if they are running good or bad. But there is not really a good way to quantify just how good or bad. PokerShowdown quantifies the luck experienced by a player with a set of calculated statistics called "luck factors". In general, a luck factor greater than one indicates good luck and a luck factor less than one indicates bad luck. For more details on the calculated statistics see the "Stat Details" tab.

I made a YouTube video about basic usage of PokerShowdown which can be found here: basic usage

PokerShowdown uses proven statistical methods to quantify how lucky or unlucky a player has been.
With PokerShowdown you can:
Currently supported poker sites: PokerStars, FullTiltPoker, America's Card Room, BlackChipPoker.

PokerShowdown searches the hand histories of supported sites for showdowns where the hole cards are known. Among these showdowns, PokerShowdown identifies events that, if everything is truly random, players will have a 50% chance of being on the positive side of that event, and 50% chance of being on the negative side of that event, over a large number of showdowns. That event is commonly known as a bad beat (positive side = suckout, negative side = bad beat). With how PokerShowdown defines a bad beat event, if the hand histories being processed find 1 million bad beat events, then there will be 1 million bad beats, and 1 million suckouts, not one more or one less. That being said, why should any one player experience one more often than the other? The answer is they shouldn't over the long run.

PokerShowdown defines some ratios (LuckFactors = LFs) that make it easy to determine if a player has been lucky/unlucky with regard to that statistic. In general, a value greater than 1 indicates good luck (shaded green), and a value less than 1 indicates bad luck (shaded red). For example, LF2 = SOP/BBP, so if a players SOP > BBP, they experienced suckouts more often that bad beats, and have been lucky.

Another way PokerShowdowns measures luck, is by the severity of a bad beat. There are really two ways to measure bad beat severity: odds that were overcome, and the amount of chips won (or not won). These measurements are combined to make "bad beat factor (BBF)" and "suckout factor (SOF)". As an example, if someone hits a one-outer on the river after calling bets from behind each round, the odds overcome were pretty high. However, if blinds were small, and the bets were minimal, and the pot size was relatively small, then the "chips not won" was small. Contrast that with that same exact one-outer occurring at a final table with huge blinds and a huge pot. The BBF and SOF values would be much higher in the latter situation. Each bad beat event has a BBF and SOF associated with it. A player's average BBF and SOF is combined to from LF3. Again, if LF3 is greater than one, their average SOF has been greater than their average BBF, so their average SO has been more 'severe' than their average BB. So they have been lucky with regard to that statistic.

LuckFactor (LF) combines LF1-LF3 into a single LuckFactor. LF is a good measure for if that player has been lucky/unlucky over the period being evaluated (LF column has been circled in the below screenshot). RIBHA and RIBHB stand for "run into big hand ahead/behind". This statistic identifies events where a player is put in an unfortunate/unlucky situation. For example, if you are dealt KK and the player to your left is dealt AA, that is pretty unlucky and you will likely lose a lot of chips. I came up with a measure for this at each round, and won't put the details here. Just think of this as having a big hand against an even bigger hand. As with any of these statistics, there is no reason a player should experience the positive/negative side more than the other. For each time you have KK against AA, it is only fair that you receive AA against someone else's KK in a different hand, over a large number of hands. LF4 is not included in the overall LF.

Any of these stats can be calculated over different periods (Cumulative stats period). These include per day, per month, or all time.

Click on any cumulative stats row, and the lower frame will show the showdowns that went into calculating those statistics. You can drill down to the lowest level by double clicking on a showdown row. This will bring up an annotated hand history for that showdown (annotated lines start with ###). An example of an annotated line is below:

Some showdowns are not included in the cumulative stats (rows that are shaded grey). One reason is split pots where more than one player won chips. This can be complicated to figure out and doesn't occur often enough to be worth including. Also, if any player mucks their cards, that showdown is not included in their stats. Some hand histories actually show mucked cards, so it is possible to calculate all the necessary probabilities. However, because a player only mucks if they lose, including mucked hands could bias the results.

I use PokerShowdown every time I have a session of online poker.   I feel I've come up with a great set of statistics that capture and quantify how much luck (good or bad) a player has experienced.   This tool does not focus on poker skill as other popular poker tools do.  Below I plotted my LF (Luck Factor) for January 2017 vs tournament profit.   There is an obvious correlation between getting lucky and profiting in touraments (or having bad luck and not cashing). 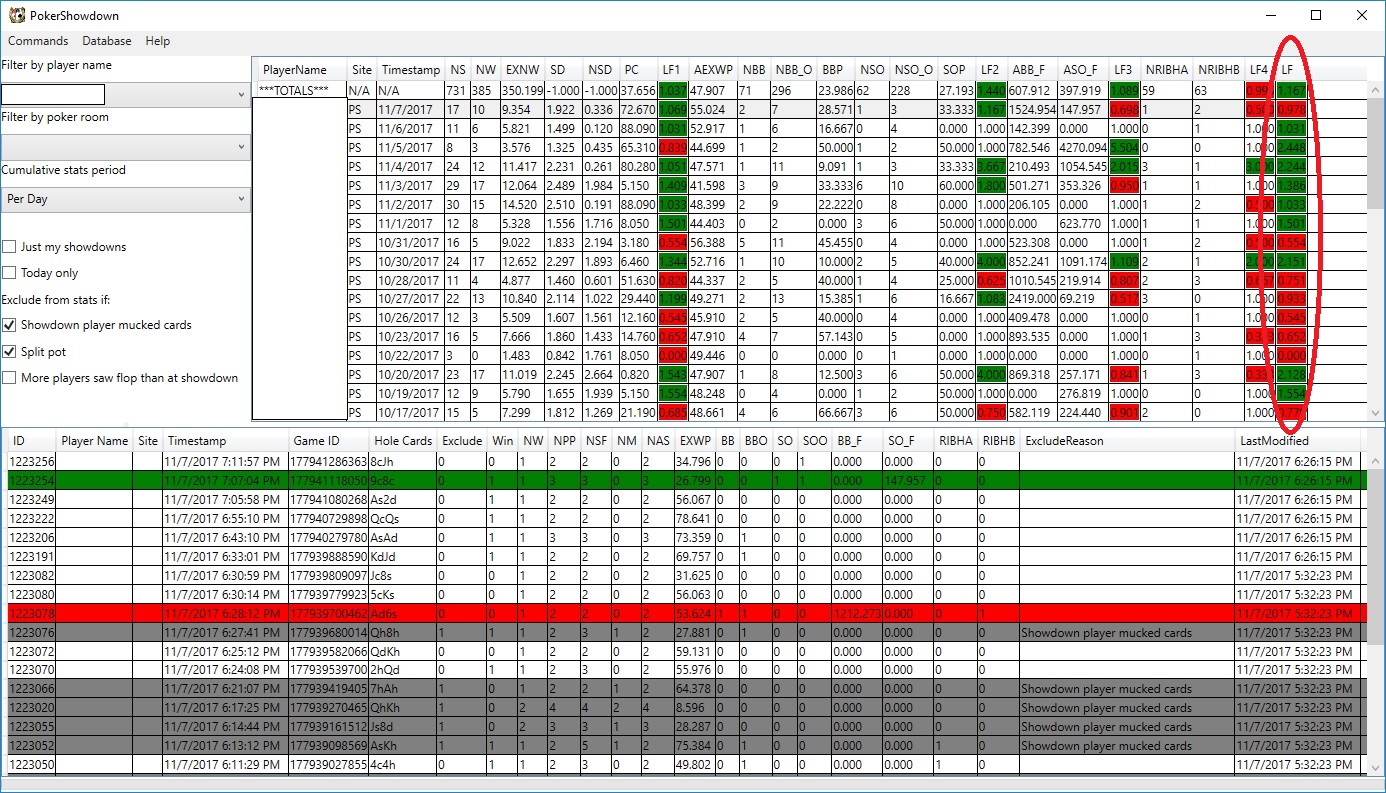